In the Seventeenth Measles Alert, we reported on the first information items concerning the measles epidemic affecting the Yanomami people: first in the Brazilian state of Roraima, and then, as of March 2018, on Venezuelan territory, (1) all of which was collected by the Wataniba Organization, an NGO. (2) The Yanomami indigenous ethnic group, a special population that lives in Brazil and in the Venezuelan state of Amazonas, specifically in the Alto Orinoco rural municipality, (Figure 1), in Alto Ocamo-Parima, in communities that are difficult to reach, along the border with Brazil, has been recently affected by this disease, starting in the month of March of 2018, (2) among them the villages of Tokori, Hokomawë I, Hokomawë II, Koaiampu I, Koaiampu II, Koaiampu III and Oroshi. At least 23 indigenous individuals from the sector of Hokomawë and Momoi were treated at Boa Vista, the capital of the Brazilian state of Roraima. Among this group, one case was confirmed. In addition, in May of 2018, it became known that there were another 25 cases at the communities of Oroshi and Irotha. (2) Of these cases, 52% were older than 25, most (88%) were male. Because this involves areas that are difficult to reach (distances, environmental conditions, travel costs), there is no accurate account of how many indigenous individuals have been affected by this disease. Vaccination efforts by the state’s health organizations have been focusing on what has been traditionally the age group most at risk, namely children. Nevertheless, given that these communities in particular have come into contact with outsiders recently, it had not been possible to vaccinate them against measles and other diseases that are not common among them; on the other hand, these diseases are associated with contact with the garimpeiros (artisanal gold miners), and as is well-known, illegal gold mining is now at its peak. According to reports by the indigenous inhabitants, the regional health organizations have not been able to enter the zone as before. (2) READ MORE 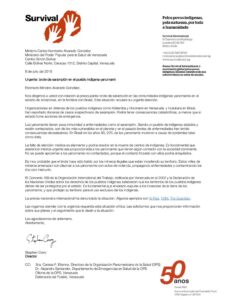 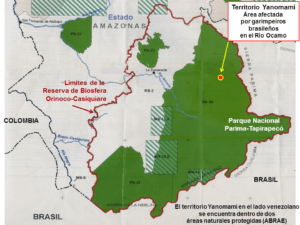 When a government deliberately stops providing essential vaccinations for the most vulnerable people such as the Yanomami putting them at risk of contracting transferable diseases such as measles, diptheria, polio that are known to decimate indigenous peoples, we need to denounce and raise our voices regarding this abuse of human rights.  President Nicolas Maduro and his Minister of Health @LuisLopezPSUV have deliberately stopped vaccinating the Yanomami and they are now at tremendous risk. See articles below.